After training with the Canadian national wrestling team, he was disqualified from competing in the Olympics at the last minute because he taught physical education. He went to Berlin anyway. This is his letter home.

I guess you will be busy with the harvest when this reaches you. We had a most enjoyable stay in Berlin at the Olympic games. We stayed at a private home & the lady could not speak a word of English. With my broken & a little German we got along swell. When we left to-day she had a little party for us – with several kinds of eats & wines & liquor. What a place. Munich where we are now is a fine old city on the edge of the Bavarian Alps. We are going to stay here three nights. We are now in a rather expensive hotel but found a cheaper one & it is very nice – for 75 cents a night. This one is 2.00 – too expensive but it is the best in town like Royal York. Gee the money disappears. I bought a camera & only hope I can smuggle it out. They are very darn strict. I see plenty of nice things that I would like to take home but we have to go thru Paris, France & their customs are also very particular. Each country searches your luggage.
At the Olympic games we saw six world records broken. Most of them by U.S.A. men. I met the chaps on the wrestling team & they got us passes for the wrestling which was very impressive. The big stadium holds 600,000 spectators and I guess there would be 200,000 wanting to get in but could not buy standing room. We were lucky to see the games. Hitler is just one of the ordinary Germans but has quite a good organization. I have not seen a thing out of place & feel more at home here than in England. Neither of us liked London. The only trouble here is the language, they cannot speak English & we have some fun asking for things. It is a good job I have a little German or we would be sunk – I do not know how Sy Baker would like it. I saw her none on the [–] in London.
We had a good time at Neils B[–] school in Denmark. In fact we almost fell in love with Denmark. We liked it the best so far. I am writing on the reverse side of this in order to save weight as I am sending this letter by Air Mail. – Hindenberg Aug 12 – & will be in New York Aug 14 & you should have it by Aug 16 or 17. Best wishes to Frank for Aug 21st. I will have to get him something but it is a weary thing to get things thru the customs. – So Goodbye.
Hope you are all well
Gordon 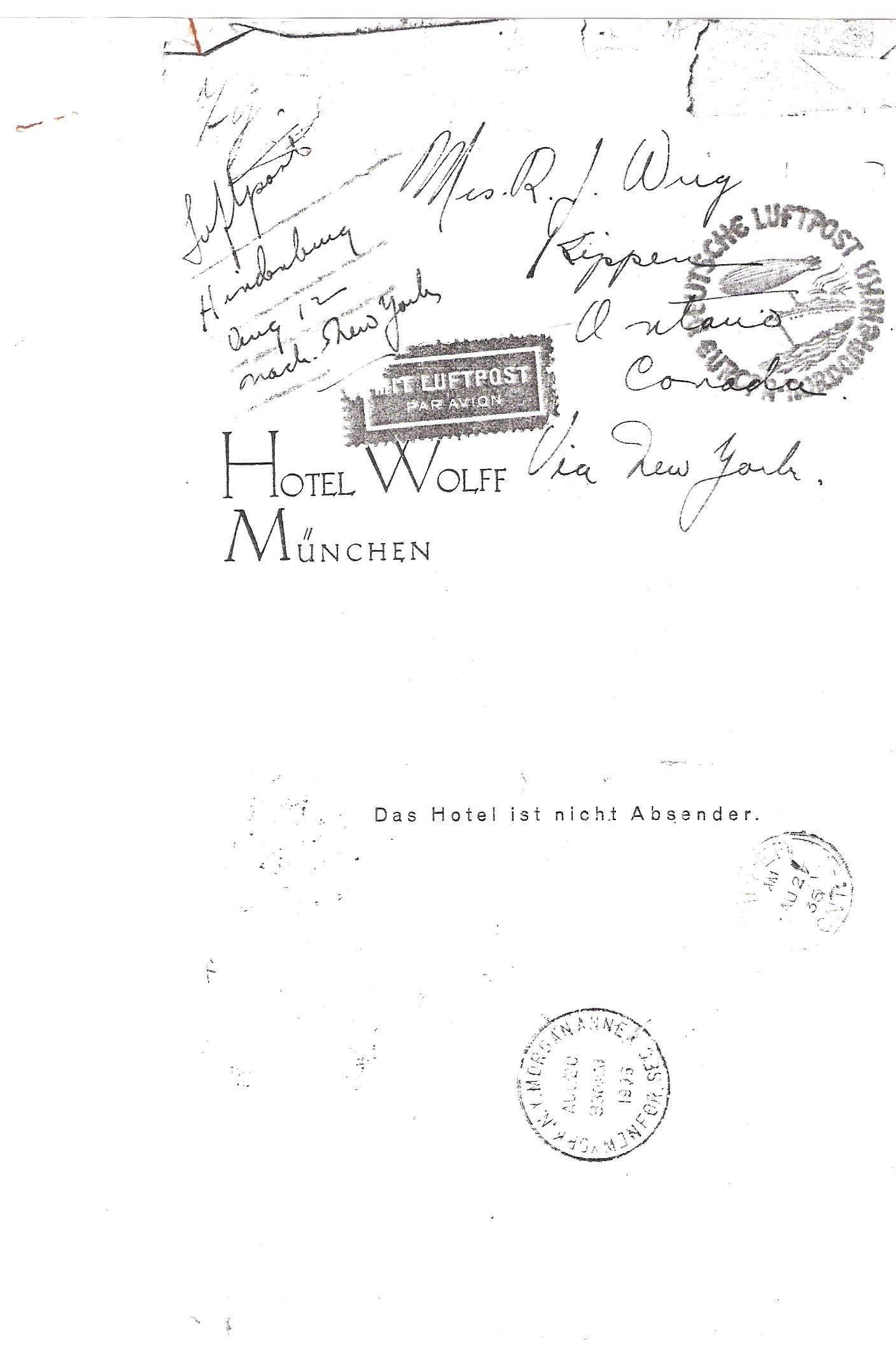 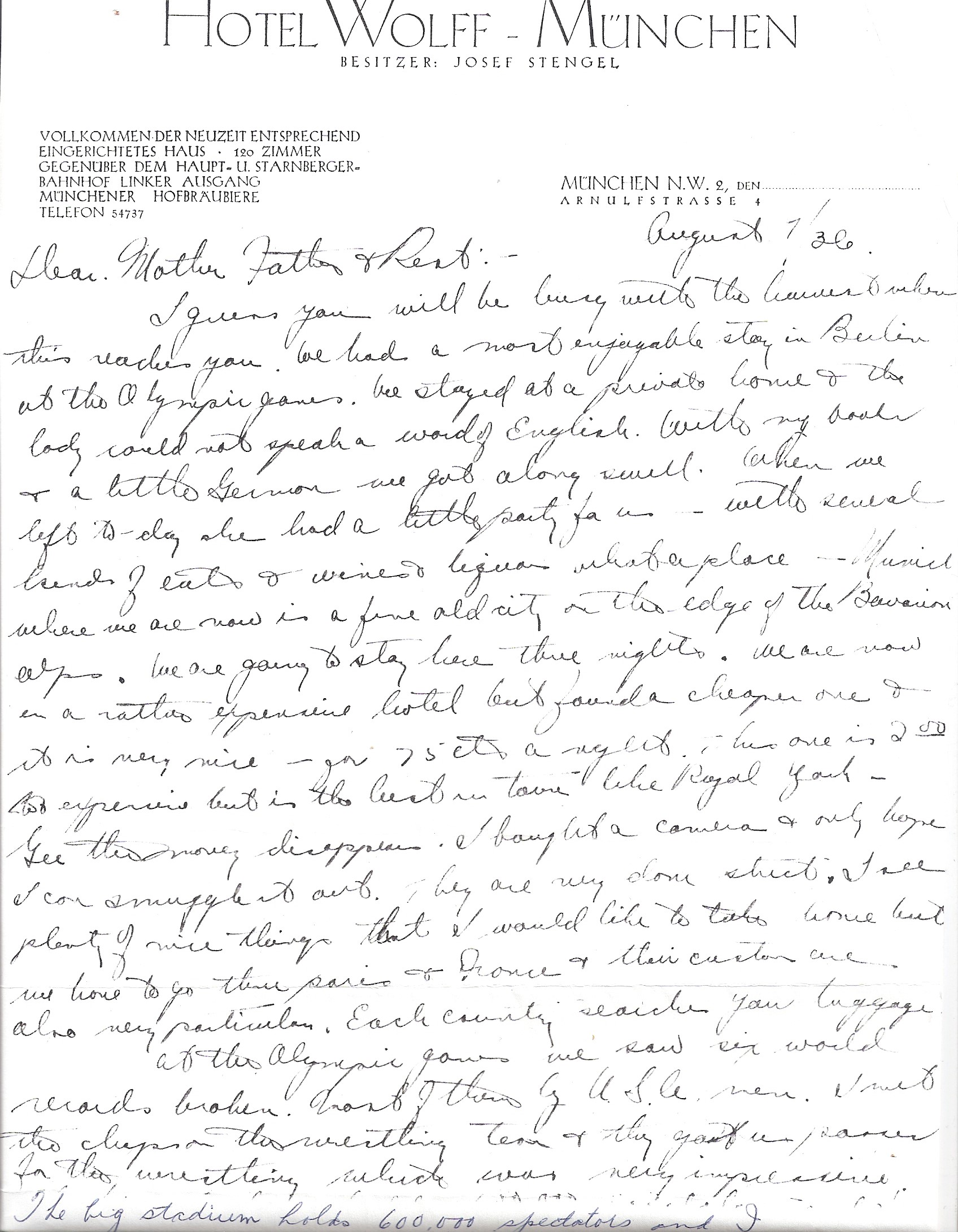 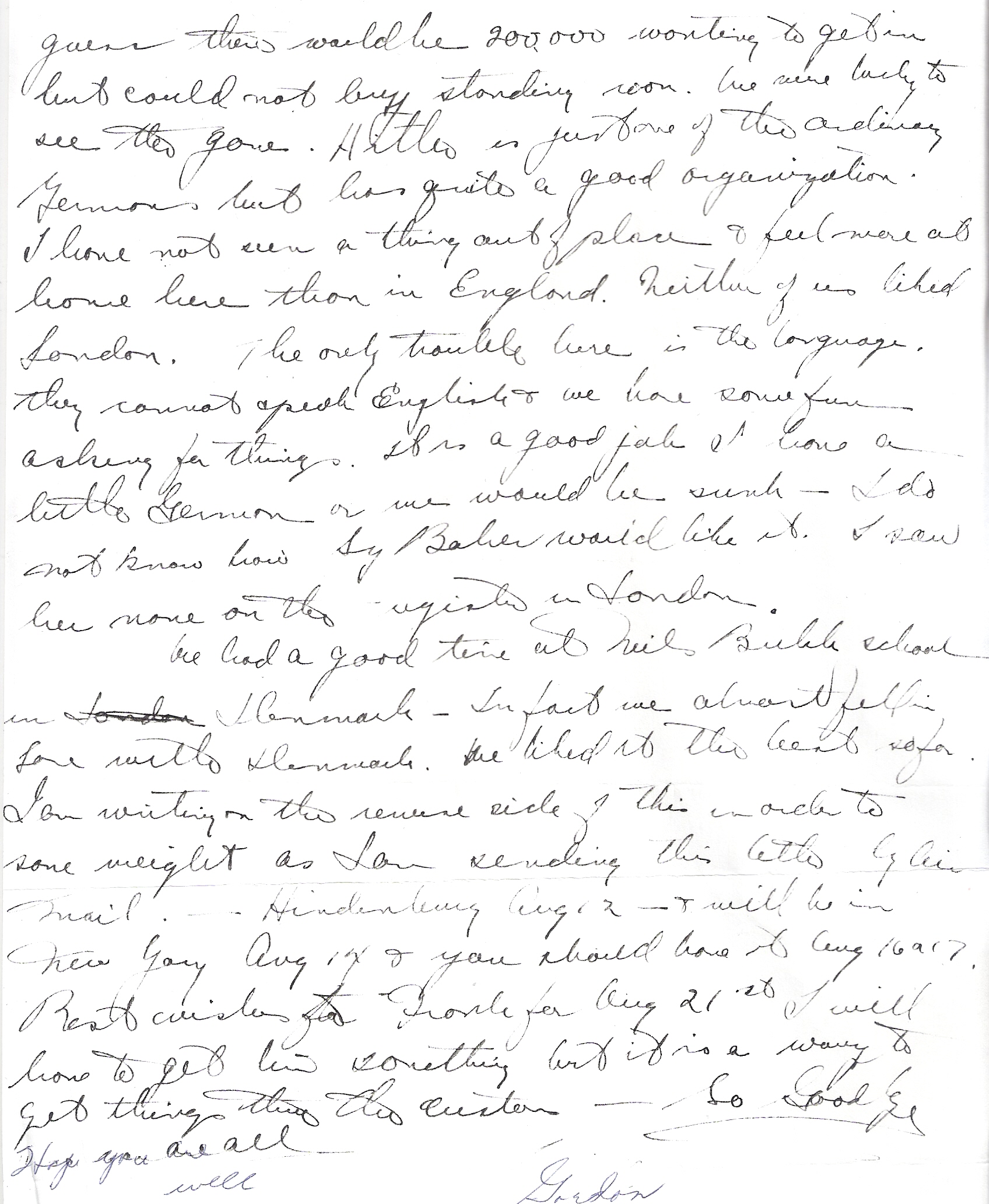